All evidence on this page has been submitted by previous visitors/investigators to RHA.
Management does not vouch for
the authenticity of any of the material.
Submitted by Marvin Yamonaco - July 2012
Roy 1st floor East Wing - Classroom taken with Full Spectrum Camera 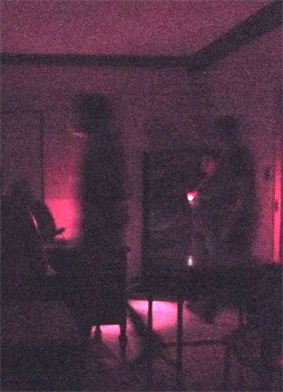 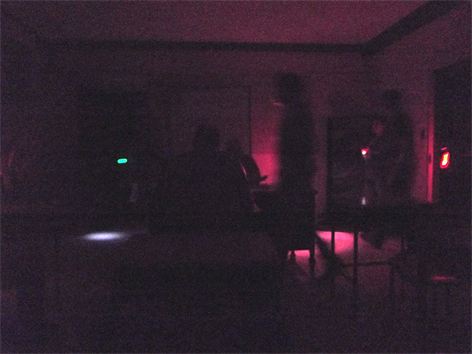 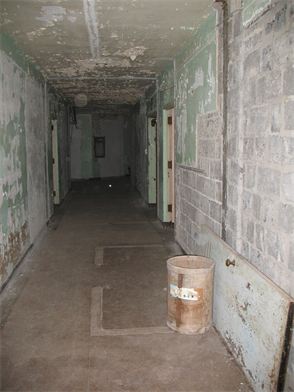 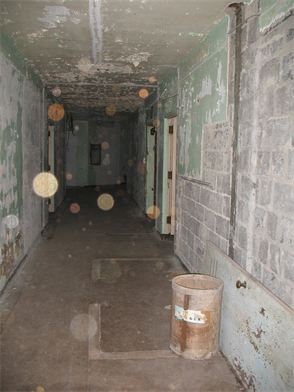 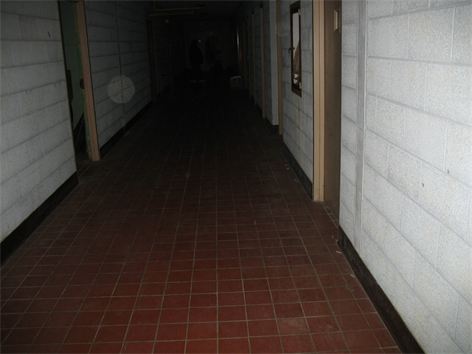 This photo taken at RH on 11/10/07 on ground floor looking down hall toward the auditorium. This is the original, untouched photo for you to examine. 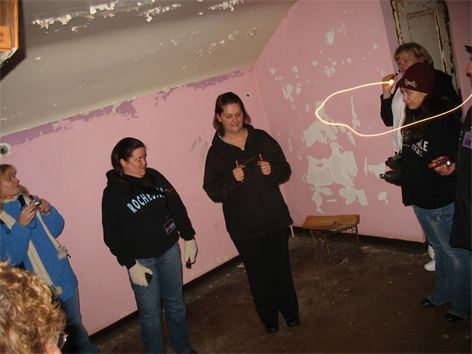 This was taken on 3rd floor I think, 11/10/07. Notice the light streams from flashlight, and dowsing rods also have a faint orange streak. 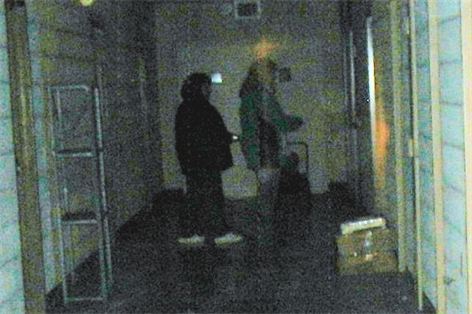 This photo taken at RH on 11/10/07 on ground floor looking down hall toward the auditorium. This one is cleaned up' photo showing what appears to be a shadow out of place. I am also enclosing the original, untouched photo for you to examine. 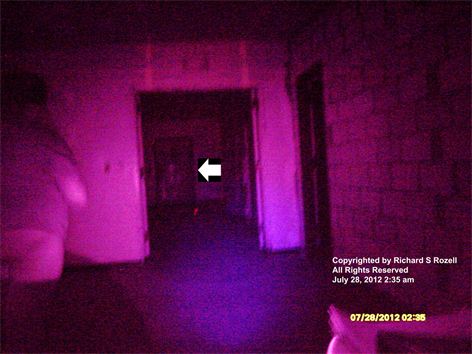 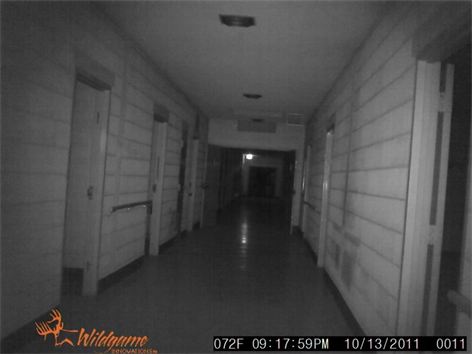 2nd floor E. Wing Shadow Hallway - past double doors on left- there is a shadowman 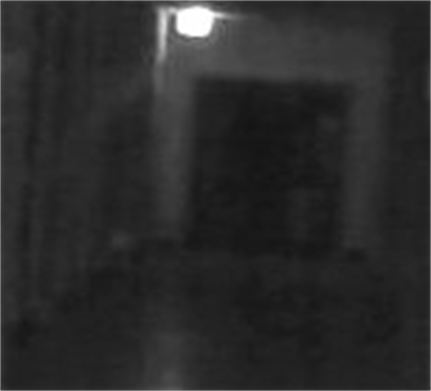 Zoomed in - 2nd floor E. Wing Shadow Hallway - past double doors on the left - there is a shadowman 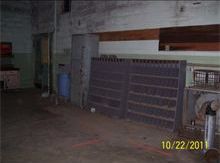 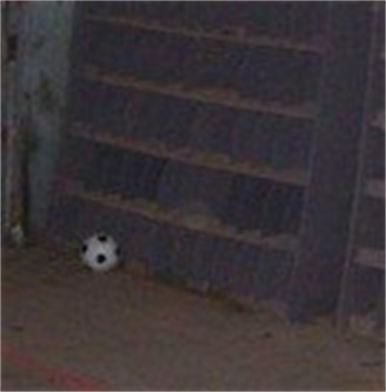 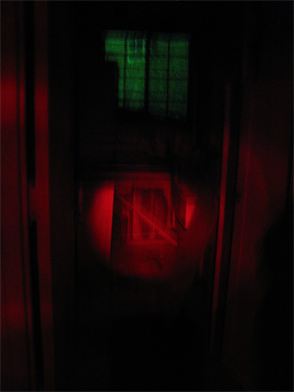 There is one photo where I took a shot and you can see the red light coming from my headlight - but then there is a green glowing light outside the window that is unexplainable to me. I know we discussed that evening that you were seeing green lights as well and showed us a few photos as well. When I was in one room Bob - had walked over to the windows quickly as he noticed a glowing green light go by in the window... 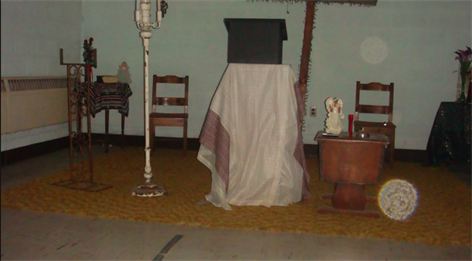 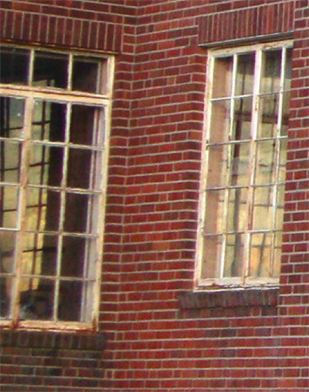 There is a dog's face in the left window. The picture was taken by Barbara as she was standing on the front lawn area of the Asylum.
Submitted by Anna & Mark Wolfe - 2010 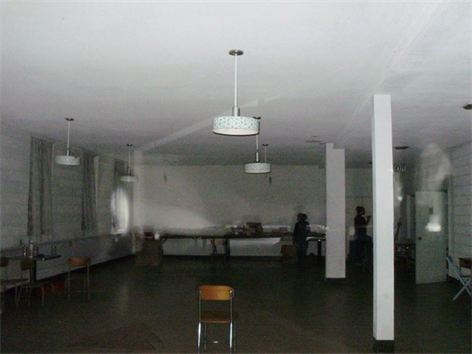 Taken in the rec room. Notice the apparition coming down from the ceiling by the door on the back right.

Close up of the apparition coming down from the ceiling by the door on the back right. 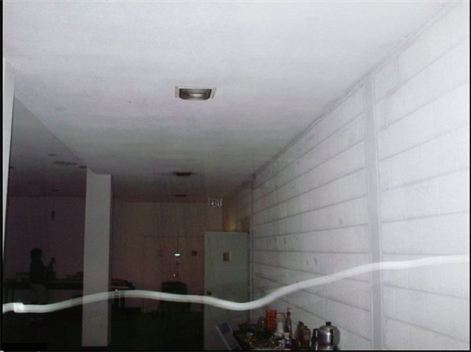 Photo taken after the apparition in the rec room.
Submitted by Celestial Spirits - OH 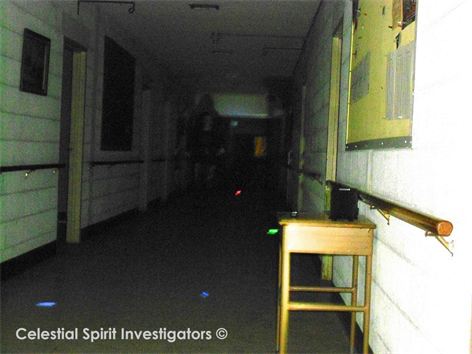 We had to disregard this photo because one of the investigators had on distressed jeans - which seems to be the case in this photo.

This is the zoomed in & slightly lightened photo from Shadow Hallway - What I am most intrigued of is the shorter child spirit to the left of larger person/shadow. Now that, Is a nice catch. However, the size of the person still poses question and debate. 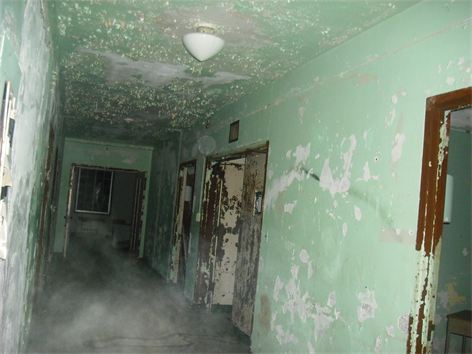 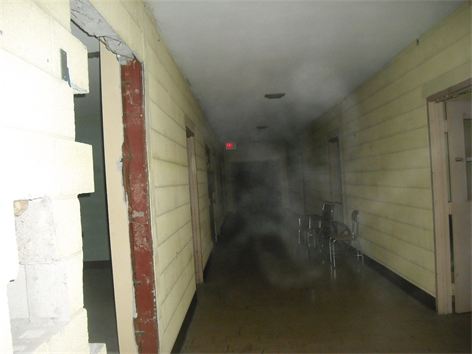 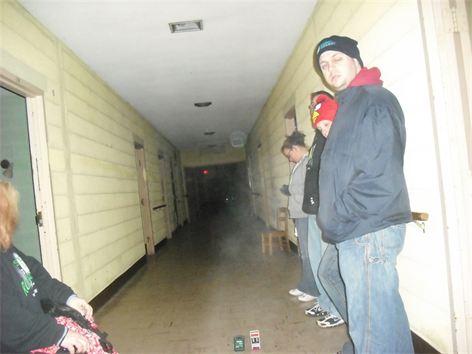 I was picking up our equipment. I just set the camera down so I can turn off my recorder and pick up my laser grid. I thought I heard something toward the ramp. I quickly pointed my flashlight in that direction. Didn't see anything at the time...

Shadow person hallway, using night vision camera. The light from the window in the room to the right was block so we moved the camera, the orb comes at us as soon as it was moved. Also, can you see the small child in the doorway on the left?

After the original EVP of Elizabeth following Scott, we continued up the stairs to the infirmary and after we were up the stairs, you hear Elizabeth ask, "Come too?"

This is an EVP of a young girl on the stairwell at Rolling Hills Asylum. She was following us as we were changing locations. We got a pegged K2 hit and caught this EVP.

The view of the infirmary from Shadow People Hallway at Rolling Hills Asylum. Do you see the shadows at the infirmary (Blue Rectangle on the right)?

During the Live Duel Spirit Box Sesions at Rolling Hills on March 7th. Amy and I from Momentum Paranormal and The RHA Team, were monitoring activity at RHA during the event. This camera was set up pinting toward the infirmary from half way down shadow people hall. The figure in the video is me :)

After Sharon asks for Roy to come thru the Franks Box - I hear clear as day "Hi its Roy"!

I heard this from my position in the hall. Sharon and Amy were near the Franks Box outside the Doll Room. I was sooooo active that night! Can't wait to get back!

This is a lighter version of the original. The video was taken at RHA and the played on my home computer and then recaptured on my iPhone.

You can play with the contrast on your computer to see the original video better.

Shadow Hallway - "I Hate You" - By Jodi Nettles, S.O.S. Paranormal"

From Tunnel -"Nothing" in response to being asked "what would they do if he sat in the wheelchair". - By Jodi Nettles, S.O.S. Paranormal"

What if i don't want to", is right after ashbyi coughs - By Jodi Nettles, S.O.S. Paranormal"

The German ghosts whispers yes to something Ashbyi says, and then talks randomly in German as another lady is talking that was with us, and then says "what" - By Jodi Nettles, S.O.S. Paranormal"

The F-bomb one is obvious.. you'll hear its say it early on when we think we hear it, and then it bluntly says it right after i say i think i heard the F-bomb - By Jodi Nettles, S.O.S. Paranormal"

Touched your cock is really really quiet at the end of the clip - By Jodi Nettles, S.O.S. Paranormal"

the ghost says "go, give it something to play" as a lady (Jodi) is talking kind of - By Jodi Nettles, S.O.S. Paranormal"

Michael - This is the name we got when we were in the Christmas room And we got them spirit to play with the flash Light. - By Phil Hicks & Justin Keller"

Shadow Hallway - Do you hear the music? - By Phil Hicks & Justin Keller"

In Tunnel - "Guy's Wait for Me" - By Shadow Hunters of Ohio"